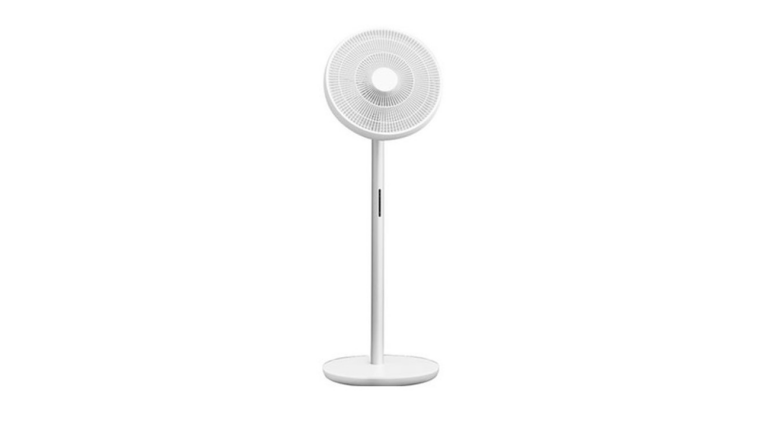 The Smartmi Standing Fan 3 is a smart new take on the old-school floor fan. It's a stylish, Wi-Fi-enabled pedestal fan that you can easily transport from room to room and control with your phone or voice. It operates on battery power (as well as AC power), and it’s easy to assemble and configure. The Smartmi is a relatively small fan that doesn’t offer a ton of power, and its integrations with other smart home devices are limited, but it’s very quiet and does an excellent job of creating a nice breeze in small spaces. That said, if you require more powerful air circulation and/or support for HomeKit, a smart ceiling fan such as our Editors’ Choice, the Hunter Romulus With LED Light, might be a better match.

The Smartmi Standing Fan 3 stands 38 inches tall, weighs just 7.5 pounds, and is supported by a round 13-inch glossy white-and-silver base. The front of the base holds a small battery LED indicator that glows solid green for 20 seconds when the battery is at 21% to 100%, glows solid orange when battery life is 11% to 20%, and blinks orange when the battery is at 0% to 10%.

Around back is a power port for charging the internal 2,800mAh lithium ion battery pack. The battery is rated to last up to 20 hours when operating the fan at its slowest speed, and should give you close to three hours of power when operating at high speed. It takes around four hours to fully charge the battery, but you can run the fan on AC power in the meantime (or anytime for that matter).

The seven-blade fan assembly sits inside of a round white grille that is 13 inches wide and perched atop a thin silver pole that sports a glossy black LED strip with green lights for fan speed and a white light for Wi-Fi connectivity. The top of the fan assembly contains an on/off button, and on the back of the motor is an oscillation button.

Included in the box are the motor and column assembly, a remote, the base, the fan grilles and blade, knobs for attaching the grilles and fan blade, a base mounting bolt and Allen wrench, a power cord, and a user manual. 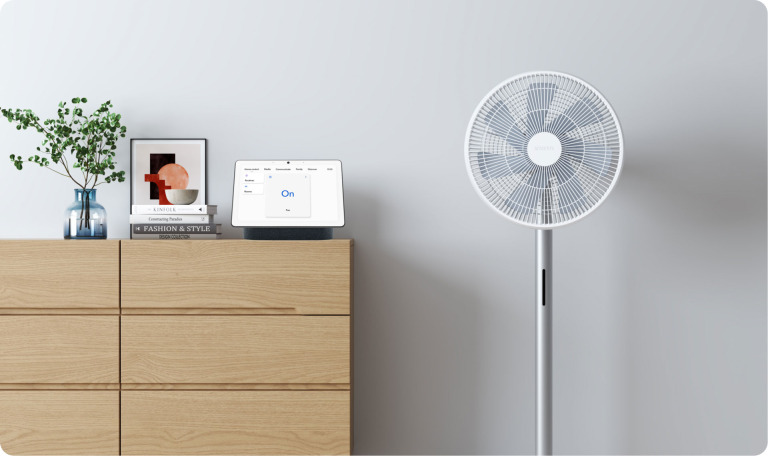 The Smartmi fan uses the Mi Home app for Android and iOS devices. It opens to a screen that contains panels for each of your installed Mi Home devices. Tapping the fan panel takes you to a screen with a circle that is stationary when the fan is off and pulses when it is on. The circle is blue when the fan is set to Standard mode and green when it is set to Natural mode. Natural mode uses varying fan speeds to replicate the feeling of an outdoor breeze.

Just below the circle are temperature and humidity readings, but the temperature reading is only reported in Celsius units and there is no setting to change it to Fahrenheit. Below these readings are four buttons: the Power button turns the fan on and off, the Standard button puts the fan into Standard circulation mode, and the Natural button puts the fan in Natural mode. The Level button allows you to choose one of four fan speed presets, with Level 1 being the lowest and Level 4 being the highest. You can also use the slider to manually adjust the fan speed from 1 to 100.

Swipe up to access other settings where you can configure the fan’s oscillating angle (off, 30, 60, 90, and 120 degrees), turn the fan direction left or right in small increments, set an off timer, adjust LED brightness and sound volume, and enable a child lock. To access more settings, tap the three dots in the upper right corner of the screen. Here you can create on/off schedules, change the fan’s name, update firmware, and create automations to have the fan work with other Smartmi devices such as the Mi Home Security Camera. Missing from the app is a gauge that tells you how much battery life is left.

Setting Up and Using the Smartmi Standing Fan 3

I downloaded the Mi home app, created an account, and tapped the plus icon in the upper right corner of the screen. I tapped Air Treatment from the list of devices, selected the Standing Fan 3, and followed the instructions to press and hold the power and oscillation buttons for five seconds until the fan beeped. I selected my Wi-Fi SSID, entered my Wi-Fi password, and waited a few seconds for the fan to connect to my home network, then selected a room, gave the fan a name, and the installation was complete.

The Smartmi Fan worked well in testing. It’s not the most powerful unit, but as a personal fan that you can take with you as you move from room to room, it's strong enough to create a nice breeze. The fan responded instantly to commands made using both the remote and the mobile app, and Alexa voice commands to turn the fan on and off and to enable and disable oscillation worked perfectly.

In addition, the fan followed my on/off schedules without issue, and temperature and humidity readings matched up with readings from a Nest Thermostat installed in the same room. I got a little under three hours of battery power when running the fan at high (level 4) speed, and around 16 hours at low (level 1) speed, and the battery needed around four hours to full recharge.

With the Smartmi Standing Fan 3, you can catch a nice breeze just about anywhere inside of your home. The fan’s very manageable weight allows you to move it around without much effort, and it runs on batteries so you don’t have to worry about staying close to an outlet. It doesn't offer the kind of power and features that you get with more expensive smart air conditioners or ceiling fans, but it’s much less pricey and is more geared to cooling your personal space rather than an entire room. Support for HomeKit and IFTTT would be nice, as would the ability to read the temperature in Fahrenheit, but if you’re looking for a smart, affordable way to stay cool, the Smartmi Standing Fan 3 is a solid choice.